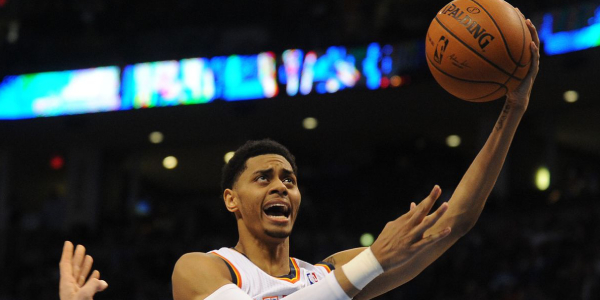 The smaller, more intimate Orlando Summer League is in the books, with the OKC Thunder crowned the inaugural champions of the event. There was a lot of big man talent on display, with newbies and returning players alike doing their best to thrive in this notoriously guard friendly setting. So how did they do? Read on to find out 8Steven Adams Adams had a surprisingly solid first Summer League, on both ends. After a nervy first game in which he looked to fit in rather than stand out, Adams strung together three consecutive strong games, flashing some offensive potential to go with his stout defense and solid screens. In two of these games Adams’ pick setting was key to his teammates exploding offensively. Against Detroit, Reggie Jackson went for 35 points overall and 23 in the 4th quarter and it was screens from Adams that freed him up to reap a lot of that carnage. The next game it was Jeremy Lamb coming off Adams’ brick wall picks and pulling up or carving into the paint. This is one of Adams’ bankable skills that he can bring to the table from day one, and with how often and well both Russell Westbrook and Kevin Durant use picks it could be his ticket to some minutes in the big leagues.

Adams also showed some nice touch this week, knocking down two of his four jump shot attempts and hitting at 67% from the charity stripe. His post offense was limited to backing guys down and throwing up a hook (some of which looked nice, some which…..didn’t) but he showed growth in terms of keeping the ball up high and protecting his dribble as the week wore on. This offensive production was a nice bonus but it was Adams’ defense that showed why the Thunder picked him 12th overall. He was solid in the post all week and did a good job altering shots when opposing guards penetrated. He held his own against more experienced players and although he did average four fouls a game, overall his defense was extremely effective. Adams ended up averaging 9 points, 6.5 rebounds and 1.2 blocks in 27 minutes a game while shooting 60% from the field. 8Mason Plumlee Plumlee had an up and down week in Orlando, at times showing the polished offense and athleticism that made him a first round pick but also displaying some of the difficulties finishing around the rim and defending his position that made him fall out of the lottery. In his first two games, Plumlee was strong in the paint and on the boards.

In his debut, he snagged 14 boards in 30 minutes but it was his second game that was the most impressive – 23 points, 9 rebounds and 8-8 shooting. After this strong start however, Plumlee struggled. He didn’t break 50% from the field in another game and his rebounding numbers tailed off severely. Mason ended up averaging 13.2 points, 7 rebounds and 2.4 assists on 46% shooting for the week. 8Rudy Gobert Rudy Gobert’s introduction to American basketball went well, on the whole. Apart from the unfortunate news that he’d have to undergo foot surgery following Summer League, Gobert had nothing but good surprises for Jazz fans and the media alike. The first thing you notice when watching Gobert is the utterly immense amount of space he takes up on the court. His height and length really do separate him even from other 7 footers and he put that to good use this week, blocking shots and rebounding at a high level. In addition to being a space eater on defense Gobert was relatively efficient, if not particularly prolific, on the other end too.

He shot 53% from the field and 70% from the line while putting up 5.4 points in his 21 minutes a game. Put backs off offensive boards was his bread and butter this week and it’s a good bet that will be the case for his rookie NBA campaign also. Overall, Gobert showed the combination of mobility and size that had him projected as high as #4 in the months before the 2013 draft. While his slender frame and unimpressive French League numbers still scream bust, he showed here why Thabeet comparisons might be premature. 8Andre Drummond Drummond was the dominant player at Orlando Summer League. He wasn’t particularly efficient – shooting 52% from the field, 33% from the line and turning it over 5 times a game – but nevertheless he looked a man amongst boys. Drummond averaged 15.5 points and 14.8 rebounds in under 30 minutes a game and threw in 2 blocks and 2.5 steals as well, just for good measure. There is no need for Drummond to return to Summer League in the future – he’s clocked it. 8Fab Melo Melo had a solid week in Orlando, hopefully a sign that he might be more ready to contribute in the NBA this year than he was as a rookie. In 18 minutes a game, Melo managed an efficient 6.2 points while rebounding and blocking shots at a decent rate.

Expectations for the raw Brazilian big man are pretty low at this point and he was totally overshadowed here by Kelly Olynyk’s spellbinding offensive heroics, but he may be able to get some backup minutes for the rebuilding Celtics this season without embarassing himself. 8Miles Plumlee Miles was the more impressive of the Plumlee brothers on display in Orlando this week. That might be expected given he has a year of NBA experience under his belt, but it was probably nice for Pacers fans to see nevertheless. Plumlee managed to average 10 points, 9.5 rebounds and a super impressive 3 blocks in just 27 minutes a game. He finished athletically on one end and swatted in similarly impressive fashion on the other. If he can translate any of that production to the NBA, he might be able to nab some spot minutes behind Roy Hibbert and Ian Mahinmi. 8Daniel Orton Orton made a strong case for the Thunder to keep him around for another year in Orlando. He shot nearly 70% while putting up 12 points in only 17 minutes a game. His speed and athleticism stood out from the crowd and he showed good hands and an ability to finish in traffic as well. His defensive awareness and effectiveness are still questionable but I think there is a good chance that Orton is a better backup C option for OKC than Thabeet. Certainly Adams and Orton between them look like they could cover backup duties behind Kendrick Perkins this season. 8Kyle O’Quinn Kyle O’Quinn solidified his reputation as a productive, polished backup big man during Summer League.